The graphical user interface comprises of all graphical elements that are used for interaction and control of the game by the user. That includes the standard screen layout as well as various menu windows.

The screen layout is quite simplistic compared to other MMORPGs, more similar to what you'd expect from a shooter game. 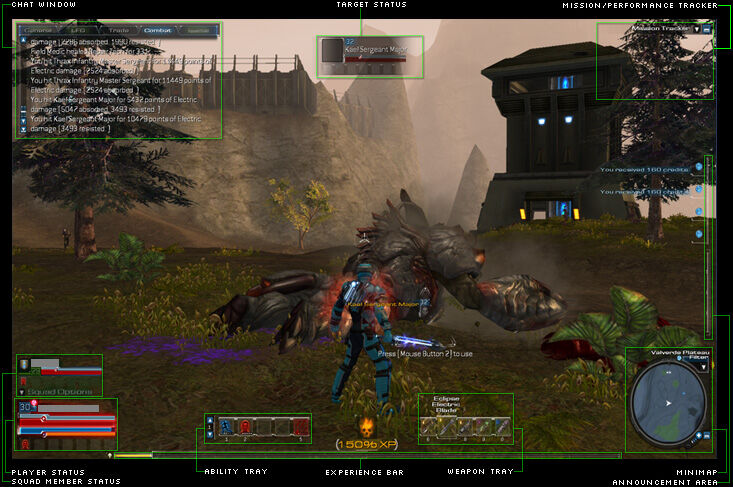 Similarly to the player status area, this displays your squadmates' levels, names, body armor, health, power, buffs and debuffs. It shows as dark if they are not in the same zone or instance as you.

Similarly to the player status area, this displays your target's level, name, body armor, health, buffs and debuffs. In the case of mobs, this also displays whether they are a boss or not; if they are a boss, the area around their portrait will be glowing a fiery red.

In addition to this targets can sometimes be used or talked to. This is indicated by the white triangle (visible in the picture to the player's right) and text underneath indicating the action and the key to press to do that action.

The mini map, also known as the radar, shows your immediate surroundings up to approximately 80m away at the furthest zoom level. The name of your current location (zone) is at the top of the mini map. A number of filterable icons are used to represent various objects in your vicinity. A list of these icons, as well as more information can be found at the full article: Mini map.

In the center of your screen, you will find a crosshair. This allows you to target objects, players, NPCs and enemies. It will change depending on your ammunition, reload and even weapon type.

The weapon and ability trays are displayed at the bottom of the screen and indicate currently equipped weapons/tools and abilities/items. In the default Control Scheme, FPS Style, the weapon tray is on the left; in MMO Style, it is on the right.

In the upper right corner of the screen, information is displayed in several trackers:

The Mission Tracker (default key: F2) is displayed by default. It displays key information about ongoing missions. The missions displayed in this tracker can be chosen by checking the selection boxes in the mission log. Newly gained missions are added to the tracker automatically. The tracker is reset when switching zones.

The Wargame Tracker (default key: F3) is displayed by default during wargame feuds. This tracker displays the remaining duration of feuds, and points gained by either side.

The Performance Tracker (default key: F4) displays technical information about the client. This information includes the frame rate per second (FPS), ping (latency between your computer and the server) and the amount of memory (RAM) used by the client.

Above the mini map are two vertical sections that are only visible under certain circumstances. The upper set of four slots shows the items that have been automatically looted for you. The next area down shows when you have available skill points, attribute points, squad invites, clan invites and other notifications.

Chatting in TR is done via the chat form in the upper left of the user interface. Through it, players can talk with other players in a number of fashions, obtain information on their environment and combats, and enter slash commands.

When it is not receiving input the bulk of it can be set to be transparent, leaving just the left and top edges visible.

The chat area is the only part of the UI that can be customized in a significant way.

The various menu windows can be brought up in several ways:

The radial menu (default key: Ctrl) displays a number of icons which can be clicked to quickly access various menu windows such as the character window, map window and options window, among others. When targetting a player, it also brings up a contextual menu allowing you to invite him to trade or be a part of your squad, among other functions. More information can be found at the full article: Radial menu.

A number of menu windows can be brought up using keys. These may be changed in the key bindings window (default key: O, then click the Key Bindings tab).

Retrieved from "https://tabularasa.fandom.com/wiki/User_interface?oldid=33140"
Community content is available under CC-BY-SA unless otherwise noted.