A wiki and guide for Richard Garriott's Tabula Rasa™,
the massively multiplayer online game developed by Destination Games.
Tabula Rasa closed on 28th February 2009. Thanks to all the developers and GMs for a fun ride.
The community lives at the unofficial forums.

We are currently editing over 2,825 articles.
Wondering how to help out? Visit our community portal!

To write a new article, just enter the article title in the box below.

Not sure where to start?

The Logos tablet - also known as the Tabula - is a table of all Logos elements known to a character, representing the Logos knowledge in his head.

To access the Logos tablet open any pane of the Character window, then click the "Logos tablet" tab at the bottom right or simply press "J".

The tablet currently has 10 columns x 39 rows, with the bottom right element missing. This makes a total of 389 logos elements, of which 169 (as of 12/07) are currently in the game.

All the news (and the olds too) 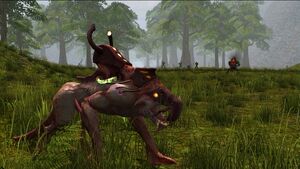